16 year-old Tyler Powderly loves going fast. According to his mom Caitlin, he’s a little bit of a daredevil.

“We went to Disney in February, and the first ride he wanted to do was Tower of Terror,” Caitlin said. “He has some kind of daredevil gene.”

“He’s hilarious,” Caitlin said. “Telling whatever types of jokes he can to get people to laugh is his priority in the day.”

When Caitlin adopted Tyler three years ago, Tyler had a diagnosis of cerebral palsy. Since then, Tyler has attended physical therapy and started walking, and he now has a diagnosis of CTNNB1 syndrome.

When COVID-19 hit, however, Tyler could no longer access his usual therapies, and Caitlin was desperate to find something for him to do.

“He had no therapies, he had no school, he had no social anything,” Caitlin said. “I was researching how I could keep him as active as possible.”

Caitlin found Freedom Concepts while searching for adaptive tandem tricycles. Once Caitlin inquired about a bike, Freedom Concepts connected her with Cerner Charitable Foundation and JT Townsend Foundation, who provided funding for Tyler’s bike, as well as Help Hope Live, who helped her create a fundraising campaign to cover the rest of the amount.

Caitlin is extremely appreciative to everyone who donated to Tyler’s fundraising campaign.

“I would love to say thank you, everyone always says that it takes a village, but that really is true,” Caitlin said. “The village we have showed up for us, and I didn’t even know it was as big as it was.”

Caitlin added that people she hadn’t spoken to in years donated.

“I think there is no equivalent to the gratitude I have for them,” Caitlin said. “I feel like gratitude isn’t a big enough word.”

Caitlin said that putting the work in to secure the funding was the biggest hurdle for her to get Tyler’s adaptive bike, but doesn’t want that to discourage families from trying to get an adaptive bike for their child.

“There’s support out there to help with the price,” Caitlin said. “You may need to put a little work into it, but it’s there.”

Caitlin emphasized that the work was well worth it.

“There’s no better gift that you can give your kid,” she said. “I think the goal of every parent of a child with special needs is to let them experience life in whatever way, shape or form we can, and I think Freedom Concepts has really developed a product that allows us as parents to give that to our children.”

Caitlin believes Tyler’s adaptive bike gives him experiences he wouldn’t otherwise have. Caitlin said that before his adoption, Tyler wasn’t able to experience things that most people take for granted, like being able to walk on his own and playing on the playground.

“This might sound a little cliché, but the freedom part is really true,” Caitlin said. “I’m trying to make up for and give him the experiences that he never got before.”

Tyler’s adaptive bike also provides him with many physical benefits as well.

“Just the speed at which I can get his legs moving is like no other piece of equipment in his physical therapy treatments or in day-to-day life,” Caitlin said. “Just that right there is going to help with muscle tone, getting his blood flowing and getting his heart rate up, so all of that absolutely benefits him.”

Caitlin said the most useful feature on Tyler’s adaptive bike is the On/Off Pin Reciprocator, which allows Caitlin to turn Tyler’s pedals off so he can rest while she continues pedaling.

“If he’s starting to get tired or if it’s a little bit too much, we can turn the pedals off,” Caitlin said. “It’s a feature I didn’t think we would need as much as we do.”

Caitlin also appreciates the tandem aspect of the bike.

“We had an adaptive tricycle before this, but I would have to push it because he doesn’t have the leg power to really get up to speed.” 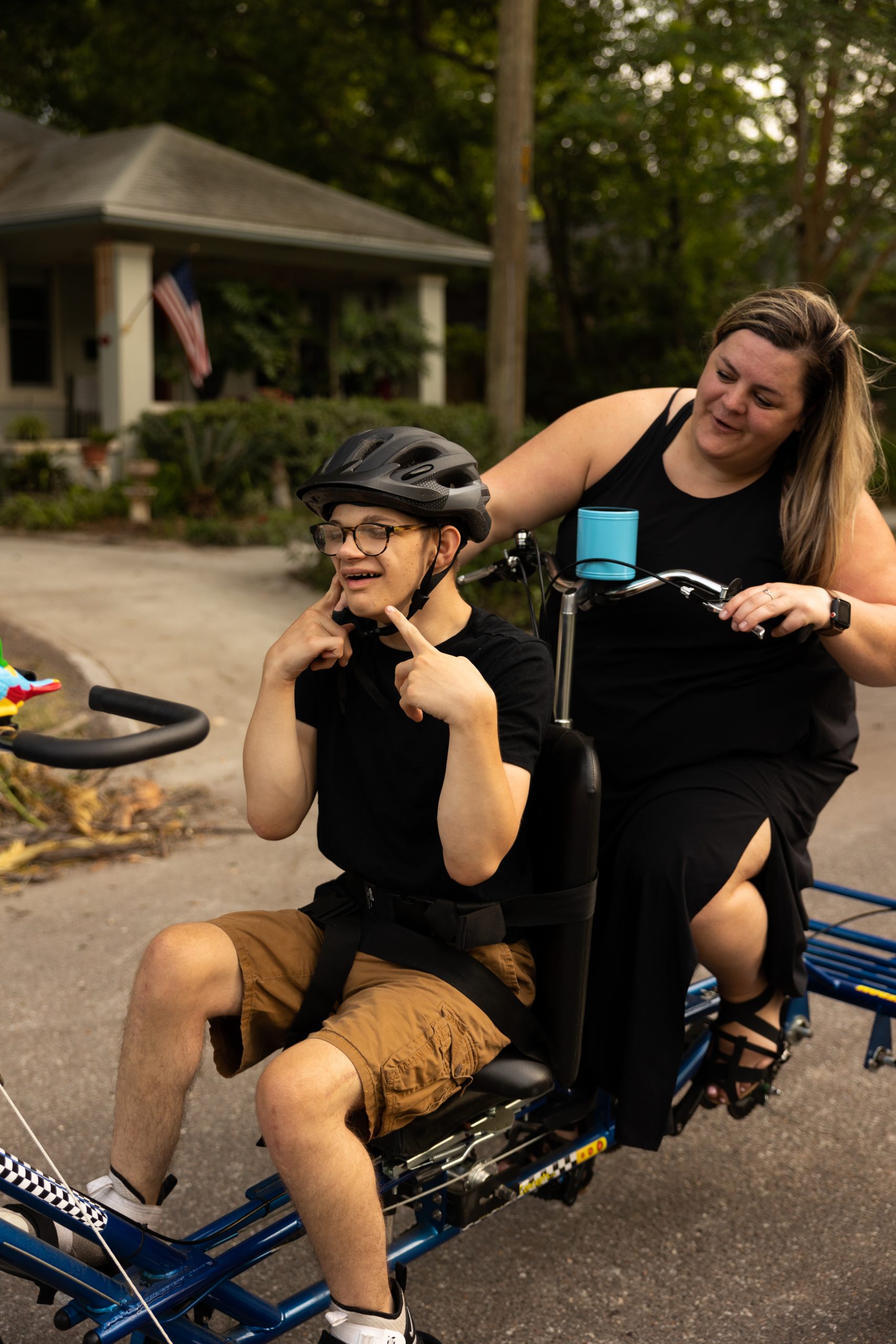 “I think the goal of every parent of a child with special needs is to let them experience life in whatever way, shape or form we can, and I think Freedom Concepts has really developed a product that allows us as parents to give that to our children.” 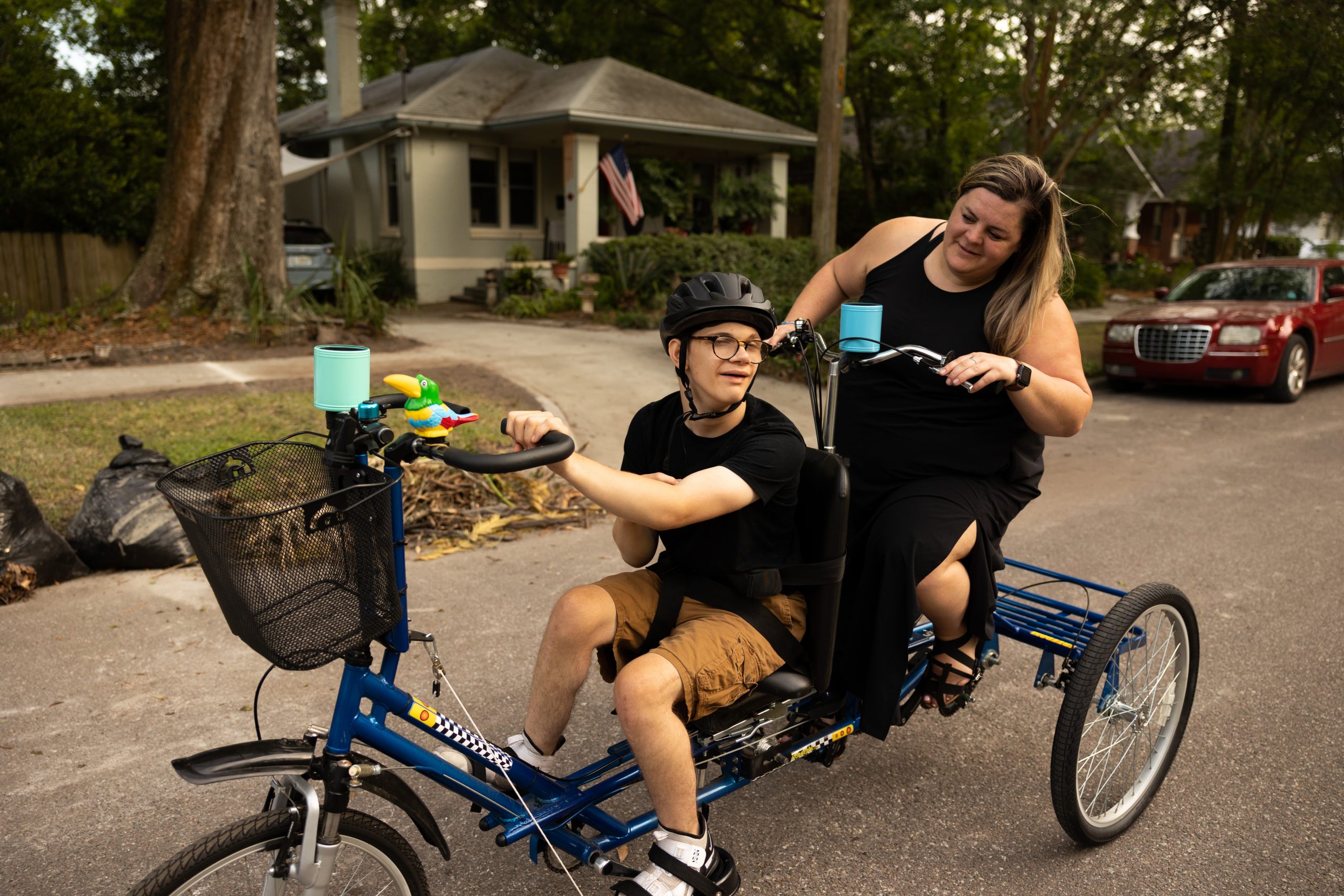 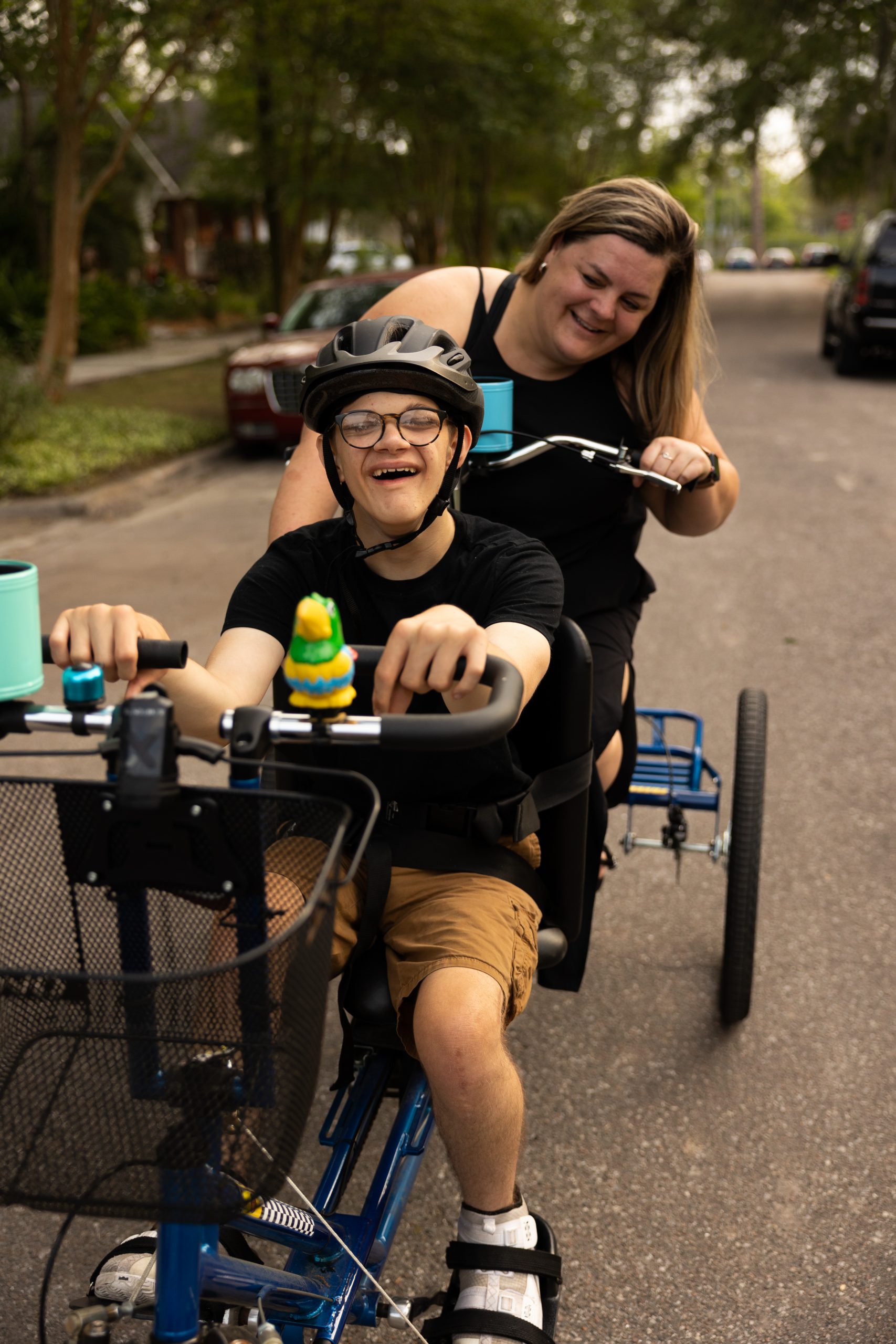